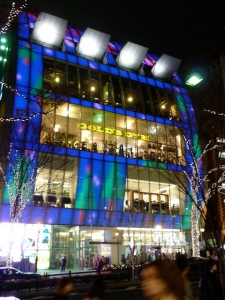 My first stop along the way was Gold’s Gym in Shibuya, an impressive installation on 3 floors (see photos attached) It had all the amenities you expect from a gym , world-class gym including sauna and jacuzzi which felt good after the long travel. Their weights are not as new as those at home .. but right now I’m being picky .
After that, it was off to the land of cosplay Harajuku . It turns out that the Goths sleep in and I was there at 9 which was about two hours at the before any of the action, so I ended up taking a walk through the streets and check the punk / hippie cool shops and great crepes; they looked absolutely delicious and I considered eating the demos for a while but later thankfully decided against it. Take a look and say you do not feel the same .
Omatesandu next stop , where all major shops names. Not much to see here, think 5th Avenue , I ‘m not much for its designer boutiques to this was the shortest part of my trip .
Finally I went to where I was staying in Asakusa Smile Hostel . It is a picturesque place , I stayed in their schedule that was a few blocks from the main inn , but it was much more recent and facilities were spotless 🙂 🙂